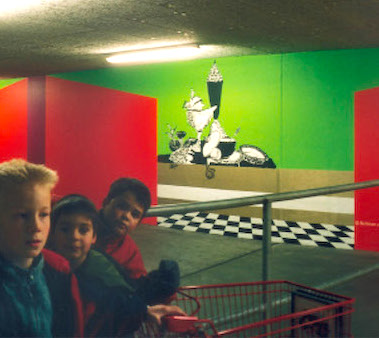 Alice in Wonderland and Vanitas in Hilversum

In the Parking garage Seinhorst you will be tempted by the design of Berkman en Janssens to eat and drink from the pleasures that you will find in the shopping centre. It is a warm welcome… 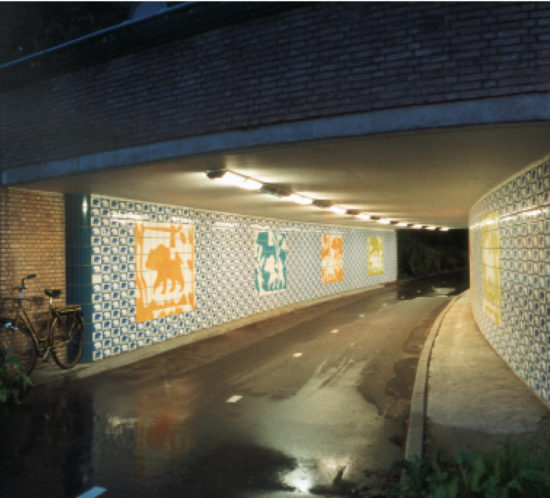 Bike with the bears….

The thousands of bears and the large colored tableaux are glazed by hand in the delftware factory De Porceleyne Fles in Delft.

These four tunnels designed by Berkman en Janssens are a safe and cheerful environment during day and night thanks to this tile art. 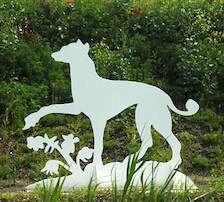 ‘The Desire’ consists of an ensemble of 16 two-dimensional white steel sculptures, from 2.5 to 4 meters high, on both sides of the Holterbergweg, as a corridor over a length of 80 meters near the Duivendrecht station.

The (animal) figures symbolize a phase of ‘the human desire’. These white images are inspired by the meaning of figures on the 16th-century carpet series ‘La Dame à la Licorne’, as in earlier works by artist duo Berkman and Janssens in ‘Hortus Conclusus’, Bleiswijk (2006) and  ‘The Love Letter’, Delft (2007).

In this series of images in Amsterdam, the source of inspiration is processed into allegorical images. On each side of the road the series is opened and closed by a monkey standing on an arcade arch. Between them are elegant vases, stately flowers of the ‘Fritelliara Imperiales’ and two watching dogs. The images can be interpreted as: lust, shame and innocence protected through loyalty.

The images, which are reminiscent of paper-cuttings, are not only visible to cyclists and motorists who use the Holterbergweg, but train and metro passengers traveling from the Duivendrecht station can also see the images clearly.

‘het Verlangen’ – ‘Desire’ is replaced in 2019 in a new composition at the corner of Holterbergweg – Buitensingel, Amsterdam – Duivendrecht. 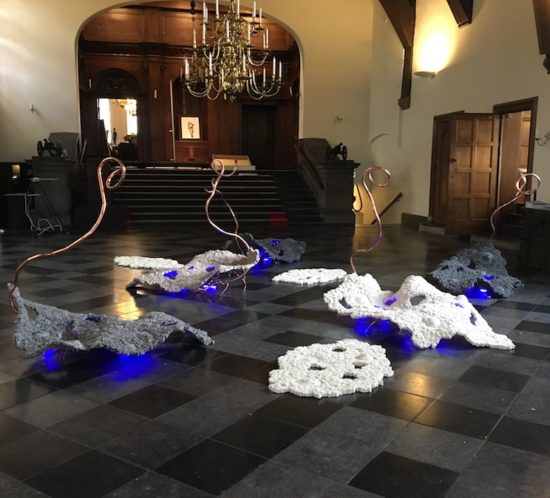 What floats under the surface of the sea, becomes visible. Seaweed and Algues.

The most important element to stay alive comes from the underwater world. 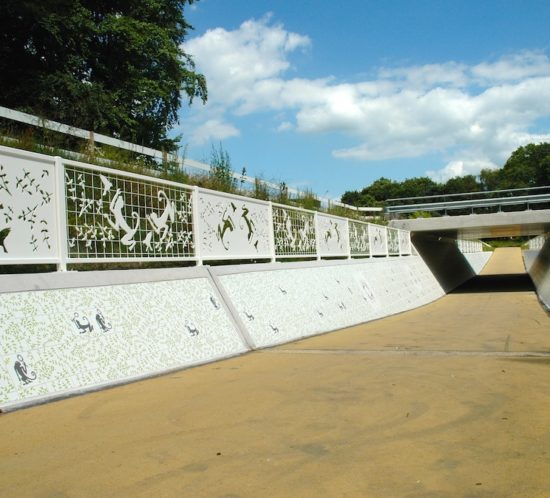 The artwork of Berkman en Janssens in the bicycle tunnel consists of 500 m2 of decorated tiles and a fence with a total length of 112 meters.

The title is derived from the carpet series ‘La Dame à la Licorne’, about the meaning of the senses in the concept of desire. 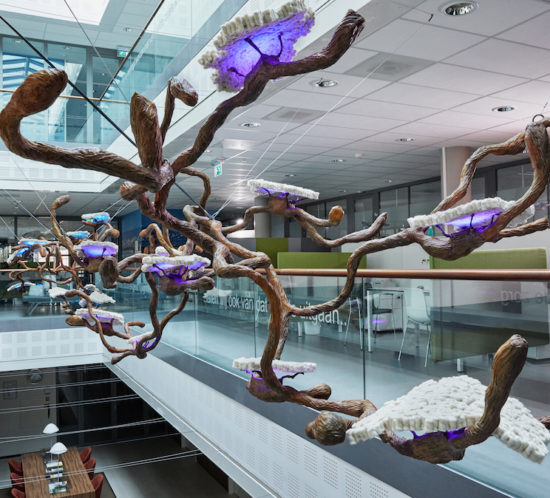 A hanging sculpture with the name ‘The Ocean Breathes – Sealight’ is placed in the entrance.

Visitors of the Oncology Centre are free to change the color of the lights like luminescent, floating seaweeds. This gives the artwork a meditative quality. The branch-like form is spread in the open space of the vide, so you are able to admire it from every floor. 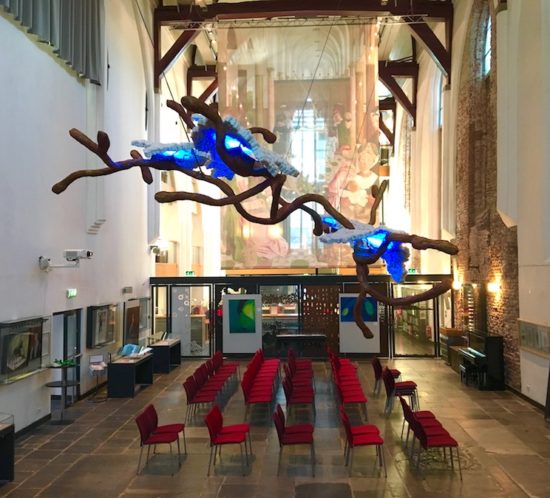 Breathe with the Ocean

A nature of form that takes you to different thoughts

I wanted to create a contemplative world in the 20 meter high church.

A world in which your eyes feel the warmth of the wool on your skin.

The lines of the branches play in the church-light.

Your hands can change the color of the light, to reinforce the image you want to see

In your favorite color

Algae and seaweeds give the world oxygen, much more than the rainforests.

Do you know someone to whom I can add oxygen?

Exhibition ‘Art from Care’ about healing art in Dutch hospitals 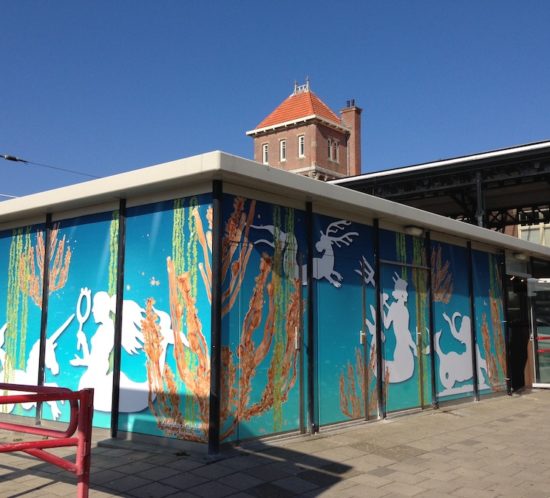 On the platform you look in the garden of Aphrodite

I consider the kiosk at train station Zandvoort as a sea-aquarium, where the underwaterworld full of mythological animals becomes visible. I am inspired by the collection of 16th and 17th century books from the library of the Teylers Museum in Haarlem, in which strange sea creatures are described and drawn, including the Metamorphoses of Ovidius.

Together with my finds of algae on the beach, I turned it all into large drawings. “Venus swims with a mirror to the Sea-Unicorn, Neptunus joins the Sea Elephant and it seems that the Seadeer is very happy in the proximity of Lady Fortuna. 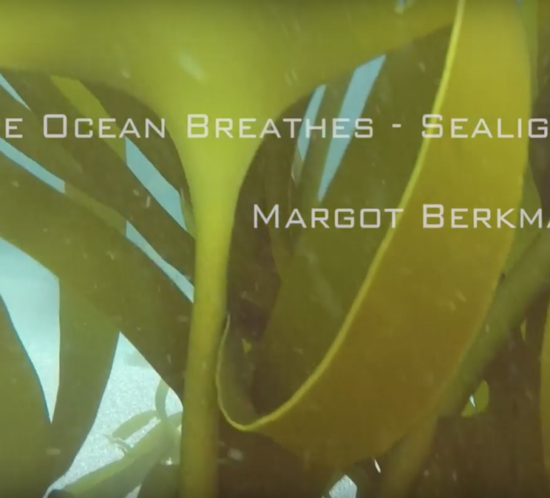 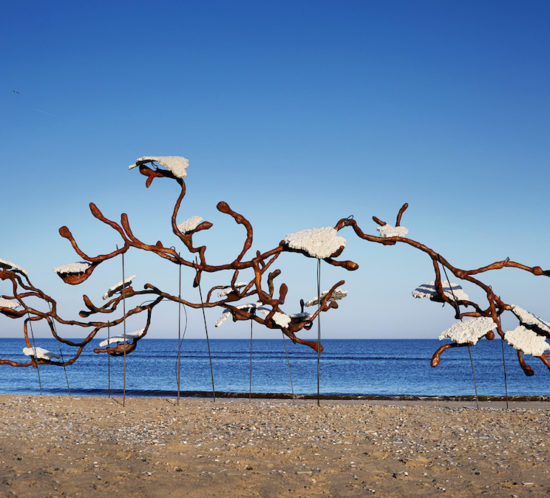 Seaweed and algues provide more oxygen in the world than the rainforests. Margot Berkman brings attention to the big kelp forests with seaweed I.