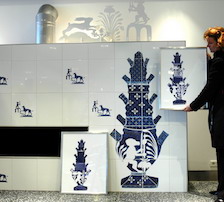 Three art commissions from IKEA for the Concept Center.

The source of inspiration for this fireplace are old tiled stoves from Sweden, the  delft blue tulip vases and  ‘De Liefdesbrief’ from Berkman en Janssens at the Delft A13 exit.

The painting ‘The Love letter‘ by Johannes Vermeer and the tapestry series La dame et la Licorne were the inspiration for the artwork ‘de Liefdesbrief’ near the A13 at the Delft exit. The perspective in Vermeer’s paintings and the warm color red, which stands for love, can be found in the red-white pillars under the viaduct. The animals are inspired by 17th-century Delft blue animal tiles and the six-part tapestry series La Dame et la Licorne (Musée de Cluny, Paris), where a woman surrounded by animals is depicted in an enclosed garden (paradise).

The artwork was unveiled on 20 September 2007 by Lian Merkx, alderman of the city of Delft, Anders Westney, CEO of IKEA, and Folkert Post, chief engineer-director Rijkswaterstaat Zuid-Holland.

For the exhibition at Museum Lambert van Meerten, Museum Prinsenhof and the realization of the artwork for IKEA Delft, miniatures are produced in a small edition.

Secret assignment for the inauguration of King Willem-Alexander in 2013

In honor of this, a King’s Tree was planted in each of the 408 Dutch communities. This was an initiative of the foundation:‘Nationale Boomfeestdag’ and the ‘Oranjebond’. Margot Berkman was given the secret assignment to design and realize a finely decorated fence for the Royal Family in 2011.

King Willem-Alexander planted on April 23, 2013 in the presence of mayor J.J. van Aartsen the first Royal tree in the Transvaal district park in The Hague. He was assisted by a number of children from group 6 of the Comenius school in that district.

On 11 March 2011, the nuclear disaster in Fukushima took place. All life in the nearby sea died.

When I walk along the North Sea beach I often find ‘Fucus Vesiculosus’ (bladderwrack). Because of the bladders, the algae keeps upright when it is under water. Breathtaking shapes in all sorts of sizes. The symbolic meaning, shape and transparency is a source of inspiration for cut out and painted studies.

The corten steel is rusted, colored from deep brown to bright orange with shapes of bladderwrack and air bubbles that are laser cut out of the steel. In the evening, the algae and the air bubbles light up through the LED lighting behind. On the wall you can see the algae. 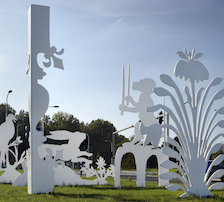 The city entrance of Delft near A13 and IKEA has acquired a poetic identity with this artwork of Berkman en Janssens.

In the public space an assembly of different elements can be seen with an area of ​​5000 m2. The artwork consists of 10 shiny white steel sculptures (h = 2,5m), black and white checkered natural stone embankments and 24 decorated pillars and lighting. Artists duo Berkman and Janssens designed and realized more than 30 artworks for public area from 1996-2010.

Sources of inspiration: the paintings by Johannes Vermeer, ‘the Love Letter’ from the Rijksmuseum, historic Delft blue tiles and the ‘la Dame a la Licorne’ carpet series from Museé de Cluny in Paris. The warm color red, which symbolizes love and the suggestive perspective from Vermeer’s work can be found in the painted pillars under the highway. The white sculptures are inspired by the animals on the carpet series ‘La Dame a la Licorne’ and 17th-century Delft blue tiles.